Turmoil in the World of Nutrition 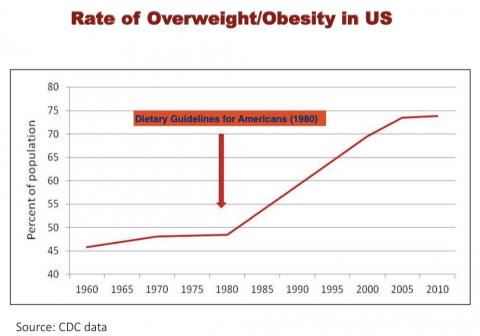 A couple of exciting events have happened in the world of nutrition recently, causing feathers to ruffle and fur to fly!

The first was really a political move that shocked many. The National Food Policy Conference was organized for early April as a key informative event for federal policy makers. Nina Teicholz, author of The Big Fat Surprise was invited to participate in the panel. Fellow panelists from the Center for Science in the Public Interest and the U.S. Department of Agriculture refused to participate if she were present! With a great deal of tact, Ms. Teicholz acquiesced and suggested a Harvard physician to replace her but that offer was rejected: a representative of the potato industry was chosen for the open seat! (Mrs. Potato Head might have been her name.)

As an advocate for restoring meat and animal fat to respected positions on our national plate, Ms. Teicholz speaks with a host of others who believe our decades’ long dietary guidelines calling for a reduction in fat consumption have actually contributed substantially (if not directly caused) our dual and accelerating epidemics of obesity and diabetes.

Thousands of people signed a petition objecting to the obvious bias respected in the conference formation and in response the Nutrition Coalition hosted a press conference before the Food Policy Conference. Representing a group of dietary researchers and others, the press conference again reviewed the evidence that the government dietary guidelines have not been the friend of our national metabolism. Prior to the 1970’s the US rate of obesity was fairly typical (at 10%) of international human history. Our officially overweight portion was higher, but stayed below 50%. You can see the oft-repeated meme in the diagram above: US Dietary Guidelines introduced in 1980 and the curve steepens to where we now count almost 75% of our population as overweight and somewhere between 30-40% as obese and/or diabetic.

The latest dietary guidelines got one thing right: saturated fat does not appear to deserve particular exclusion as it cannot be found to correlate with any increased disease or mortality.

But did they go far enough? The second piece of “news” suggests that they have a lot farther to go.

The British Medical Journal published an unusual study: results were recently analyzed for a well-designed nutritional trial… that was performed from 1968 to 1973 and never before published. In fact, the data, was hard to come by, located in a private home of a relative of one of the original researchers. From the STAT news website I quote: “If biology has an Indiana Jones, it is Christopher Ramsden: he specializes in excavating lost studies, particularly those with the potential to challenge mainstream, government-sanctioned health advice.” My kind of movie thriller!

Ramsden works at the National Institutes of Health and admirably takes his job seriously and approaches the field with integrity, not relying on conventional wisdom. He found the data via the son of the original scientist (who was luckily a bit of a pack-rat), and turned the punch cards (remember those) into information we can analyze with today’s technology.

Known as the Minnesota Coronary Experiment (MCE), scientists followed 9423 men and women, aged 20-97 and analyzed data on serum cholesterol and death records. The nutritional intervention took saturated fats from animal sources out of the diet and replaced them with corn oil and corn oil polyunsaturated margarine. (Who remembers Mazola?) As expected the corn oil eaters could boast a much lower cholesterol level than those continuing to eat meat and animal fats.

However when it came to MCE mortality data (and I quote) “There was a 22% higher risk of death for each 30 mg reduction in serum cholesterol.” There was no evidence in benefit even for just cardiovascular disease, let alone all cause mortality. The study also conducted a systematic review of four other randomized controlled trials, which also failed to show any benefit (coronary or otherwise) from lowering cholesterol.

And the world’s response?

Many people were actually convinced by this study, as if the four other randomized controlled trials weren’t already in the medical literature. My fave has always been the LA Veterans Study which I learned about in Gary Taubes’ book Good Calories, Bad Calories (my idea of a thriller in book form) and have followed. The corn oil eaters in that group did have less coronary disease, but…they didn’t control for smoking and the meat eaters had a much higher rate of smoking; the two groups had equal amounts of atherosclerosis on autopsy; and the corn oil eating group had a higher cancer-related mortality leading to a net equal death rate between the two groups. The study preceded our greater clarity on the harmful effects of smoking.

Some people (Walter Willett of Harvard, and, coincidentally, the nutritionist writing for US Rowing) remain glued to their black and white TV sets broadcasting adherence to the USDA Dietary Guidelines and the principle that “Saturated fat is still a hazard and should only have a small role in a diet balanced with whole grains, lean meat, and lots of fruits and vegetables. Stick with oils from fish, olives and sunflowers.” We do all agree that synthetic trans fats (not the naturally ones occurring in butter) are hazardous and should be limited: think donuts and French fries and processed foods.

And many of us just enjoyed the detective work of Christopher Ramsden, nodding in agreement but declining to call it “news.” Enjoy your saturated fats, even let them shine on your plate, as did my bacon and eggs this morning.

Related Articles:
But I can't eat all that fat, can I?
Dietary Fats Re-Branded
Whose Dietary Guidelines?
DEBORAH'S BLOG
Mixed Emotions

But I can't eat all that fat, can I?
When I suggest that someone consider a reduced carbohydrate diet, it obviously has to have some dietary component increased and that would be dietary fat. Many people report that eating more fat just isn't possible, either from historical dietary... [read more]
Dietary Fats Re-Branded
Glen Lawrence, of the Department of Chemistry and Biochemistry at Long Island University, has written a categorical review of the existing research on dietary fats and their impact on health markers and health itself. Published in Advances in... [read more]
Whose Dietary Guidelines?
While we’ve been busy taking apart the seriously flawed article indicting meat, we have missed celebrating a very welcome article. An editorial in an online journal called Open Heart, affiliated with the British Medical Journal, summarizes almost... [read more]