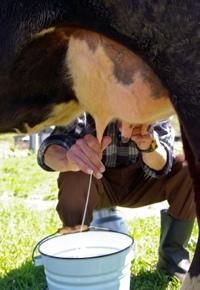 From 2004 to 2012, federal and state agents have conducted armed sting operations across America, raiding farms and issuing criminal warrants for farmers and shopkeepers from California to Pennsylvania. A few were even arrested. Were they after drug smugglers, perhaps? Or pursuing a threat to national intelligence?

Agents also seized and confiscated property. Was it contraband? No, it was raw milk, the same substance our ancestors and maybe even grandparents drank on a daily basis, when heart disease was almost unheard of and cancer was still a rarity.

Today, raw milk refers to unprocessed, untreated milk straight from the cow. The milk you buy from the local supermarket nowadays is a different substance altogether. It has been pasteurized, ultra-pasteurized, or homogenized. This liquid is not really milk. It is a chemically altered substance, heated to remove pathogens and bacteria and to prolong its shelf life. The resultant low-enzyme activity makes it difficult to digest, the altered fat content renders the vitamins and minerals difficult to absorb, and the residual drugs and antibiotics pose a threat to human health. On top of this, the naturally occurring beneficial bacteria have been destroyed.

The real issue is not whether raw milk obtained from grass-fed cows is safe. Rather, it’s that milk from commercially raised cows is actually dangerous to consume unless it is pasteurized. Factory-farmed animals are routinely fed an unnatural, high-protein soy- and corn-based diet and given shots of BGH (bovine growth hormone) to artificially increase milk production. This diet is so contrary to their biology that it causes severe illnesses that can only be combated by continually injecting the cows with antibiotics. These animals, kept in inhumane conditions far from their natural environment, are subject to enormous stresses. Drinking raw milk from these cows would be an exercise in stupidity.

Raw milk from healthy, grass-fed, and pasture-raised cows is in a league of its own. Organically raised cows are happy, fed on their natural diet of grass and other cow-friendly foods. They enjoy access to sunshine and pasture grazing in summer, and in winter they feast on nutritious hay or silage.

Natural health advocates have long cautioned against drinking milk because of the increased risk of ear infections, asthma, and eczema associated with its consumption. This applies only to commercially produced milk, not raw milk from organic farms. Raw milk actually helps protect against allergic reactions and boosts the immune system.

Raw milk is an incredibly complex whole food, complete with digestive enzymes and its own antiviral, antibacterial, and anti-parasitic mechanisms conveniently built into a neat package. It is chock-full of both fat and water-soluble vitamins, a wide range of minerals and trace elements, all eight essential amino acids, more than 60 enzymes, and CLA—an omega-6 fatty acid with impressive effects on everything from insulin resistance to cancer to cardiovascular disease. Raw milk is delicious medicine.

Commercial producers know their milk cannot be sold unpasteurized. To admit this would jeopardize their entire operation. Instead, they demonize raw milk, despite the fact that humankind has safely consumed milk in its natural state for thousands of years.

Both sides of the raw milk debate feel strongly about their respective positions, and both share valid concerns. Federal and state health agencies view the consumption of any raw milk as risky to human health. To them, milk is milk, and the only way to protect the public from the potential danger of pathogens such as salmonella, E. coli, and listeria is through pasteurization. According to statistics used by the FDA, raw milk has been linked to 1,837 cases of illness between 1998 and 2009. These led to 195 hospitalizations and two deaths. While the feds feel justified engaging in armed raids on farms, is this where we want our SWAT teams?

Raw milk advocates are upset that the government is denying their right to choose unpasteurized milk from healthy cows because of the problems associated with conventionally produced milk.

Numerous studies document the benefits of raw milk, including the “milk cure” used by the Mayo Clinic in the 1900s for diseases ranging from cancer to weight loss to chronic fatigue. A comment in a report prepared by the Weston A. Price Foundation helps explain the contradictory stances on this ancient food: “The literature implicating raw milk in food borne illness exhibits a systematic bias against this food. In many cases, this bias is not intentional, but is a product of sloppy scientific principles.” The report concludes, “It appears that most investigators are thoroughly convinced that raw milk poses a major threat to public health, and thus they often rush to judgment to implicate raw milk even when the science is not fully supportive.” Now there’s food for thought.

From Dr. Deborah’s Desk
Just as we asked one of our writers to tackle the raw milk issue, blogger Ella Riley-Adams came to the subject on her own and also covered it quite nicely.

SWAT teams are shutting down family farms in the same world where fast-food meals with sodas can be legally advertised for children. There have been numerous instances of commercially prepared food causing illness and death. The batch is recalled and the manufacturer continues.

In my practice I have numerous patients who have read the studies on decreasing allergy, eczema and asthma with raw milk and they ask me about finding a safe supply. Kris called me, particularly desperate because milk was now one of the few protein sources her finicky teenage son would eat, and she could see an increase in his nasal congestion drinking pasteurized milk. “Isn’t there some place I could get safe raw milk to at least try?” Her story reminded me of the time during my pregnancy when, increasing my milk consumption, I discovered the painful truth of lactose intolerance!

I encouraged Kris to try my raw milk farmer, who encourages customer visits and keeps a spotless facility. I can drink the milk from these cows without problem. Kris took it home and her son loved it, though she had to decant it into a special pitcher for him: milk out of a mason jar pushed his finicky button! His nose is a lot happier with raw milk.

You can find raw milk suppliers in your area. Visit the dairy and chat with other customers. Check for the rules governing milk supply in your state. Enjoy.

Related Articles:
Weston Price – The Charles Darwin of Nutrition
Ideal Diet
DEBORAH'S BLOG
How do YOU make changes?
I recently had a conversation with a fellow member of our local Rowing Club, I'll call her Wanda. Wanda has recently transformed her exercise habits, quite dramatically [read more]
Health & Wellness News
How's your health span?
You’ve probably heard alarm that our US life expectancy has gone down during the pandemic (and actually a bit before that as well), but I would suggest that one reason [read more]

Weston Price – The Charles Darwin of Nutrition
One of the fastest growing nutritional organizations and websites is the Weston Price Foundation, named for Dr. Weston A. Price, a Cleveland dentist who traveled the world in the 1920s, looking for the healthiest people on earth. What does modern... [read more]
Ideal Diet
I'll start right off with admitting that it's a little naive to imagine that there is a single "Ideal Diet" that works for everyone. From decades of clinical practice, individual variability is the principle of reality that is most often confirmed... [read more]