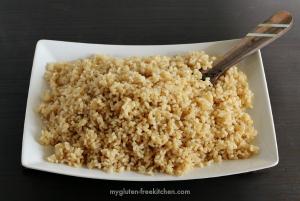 I'm grateful to the many brilliant folks I am lucky to consider colleagues, and it is from these folks that I learn "old news" that I share with you as "new news" because it's new to me. Or in this case, the science is new to me, the facts something I've "known" (could have been wrong, happened to be right: have to check these things out!) for a long time, but recently confirmed through research.

In efforts to help with the symptom of anxiety, I have often recommended people add some starchy carbs to their diet (!) Perhaps gluten-free, steel-cut oats at breakfast, but more helpfully: a sprouted form of a whole-grain rice at dinnertime. I like wild rice, black rice, brown rice--and believe they all have helped me sleep at night when I'm in a rough spot...such as this week's full moon. I have also learned about the nutrient robbing potential of phytates: the removable elements in a rice grain's husk. Removable not physically (that would be white rice), but by sprouting or germinating. Soaking for hours in cool or warm water, or purchasing the rice in its sprouted form: that would be "germinated white rice," AKA GBR.

And there is indeed some research on GBR: according to this article, it's an excellent source of dietary GABA, a calming amino acid that can help the body relax (and perhaps lower blood pressure) and can help the brain (less anxiety, better sleep.) Controversy exists as to whether GABA can cross into your brain from your body, but even if it's just relaxing your body. Relaxing is always good.

There are a few controversies raising their hands asking for recognition:

Thanks to my friends at Nourish Balance Thrive (one of my favorite podcasts) for getting me to look more deeply at my long-held-but-unresearched belief in the calming properties of brown rice!

Coping With Anxiety
Meditation Eases Anxiety and Depression
You can do it almost anywhere, any time, and it might help. I've mentioned meditation several places and recommend it as a method to soothe jangled nerves, ease sleep problems and help focus your mind.