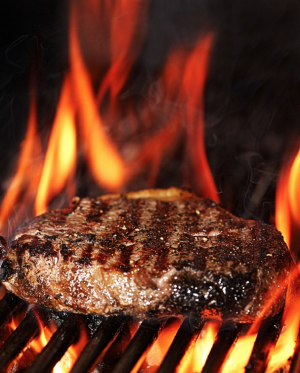 A panel of experts vested by the World Health Organization to evaluate the effects of eating meat reported on Monday (October 25, 2015) that eating processed meat (hot dogs, ham, bacon, etc.) raises the risk of colon cancer and that consuming other red meat “probably” raises the risk. As you can imagine, the report has attracted a lot of attention, and deserves to be put in perspective.

An article in the NY Times clarifies that the magnitude of the risk described is actually relatively small.  Smoking raises your lung cancer risk by a factor of 20 and annually causes about a million deaths worldwide. Eating meat raises your risk of colon cancer by a factor of 1.1 to 1.2 per daily serving of meat, resulting in about 30,000 deaths each year, over the whole world. So, we’re talking significant catastrophe compared to much less of an impact, as revealed in this study.

There was evidently enough uncertainty that, rather than the consensus opinion usually sought by such committees, 7 of the 22 members abstained from the vote and the remaining 15 reached a majority decision, not one of unanimity.

Another important caveat, well explained in the study but not in most headlines, is that the method of preparing your meat determines a lot about how carcinogenic it is. Char it over an open fire, not so good. Bake or even fry gently and you avoid many of the ill effects. Gentle cooking is certainly among the habits already practiced by health conscious meat eaters, and one of the many reasons this study will not change their choices.

And then we have to look at other studies addressing the same issue. Paleo authors who are very interested in your eating a healthy diet have long insisted that it’s the context of the diet, more than the meat itself, that causes a problem or not.

Researchers in Austria addressed that question in a study reported in 2014. The researchers divided people into four categories: vegetarian, meat-eaters that ate a lot of fruits and vegetables, those that ate normally but with little meat, and those on a more carnivorous diet. Although vegetarians had a lower BMI, they had poorer overall health, with higher incidences of cancer, allergies, and mental health disorders, even when compared against the “mostly carnivorous” group.

There were a few diseases more prominent in the mostly meat eaters, such as high blood pressure (15.5% compared to 11.5% in the vegetarians), but interestingly, less risk of heart attack, slightly more of stroke. Heavy meat eaters seem to have more arthritis, and about the same osteoporosis as vegetarians. Less ulcers, less cancer, less migraines, and about half as much mental illness. Diaabetes was most prevalent in what I would consider the healthiest diet: carnivorous, with lots of fruits and vegetables. You can check out the comparative illness rates in the table here.

I don’t know if the WHO team failed to include this study, or discounted it for some reason.

There have been other vegetarian-associated health concerns raised recently, such as diminished fertility in men—possibly due to zinc deficiency or, more likely, to an excess of soy phyto-estrogens in the diet.

A vegetarian diet lacks the nutrient dense source of vitamins found in meat and fish, and requires conscientious attention to assure adequate nutritional content. A vegan diet is woefully deficient, and would require supplementation of even more nutrients, specifically zinc, vitamin B12, omega 3’s such as DHA and EPA, and possibly other fat-soluble vitamins.

As I write this, I received a medical update announcement: Processed meat is carcinogenic; red meat probably is too, study group concludes, from a news service specifically for physicians. I think I will cook up some bacon and unsubscribe from the Washington Report. Although, it does enable me to see the headlines physicians see--not so different from the ones found in conventional media!

Good Meat News for Seniors
Researchers in Japan interviewed seniors (hovering around 67 years of age) regarding their protein intake, either animal or plant, and evaluated their functional abilities measured in social, intellectual, and physical activity spheres. You can... [read more]
Red Meat and Breast Cancer?
The possibility of a connection between red meat and breast cancer has been scrutinized repeatedly over the last two decades, probably in an effort to give women more control over a disease that so often seems to strike without reason. For instance... [read more]
Red Meat and The Company You Keep
Snowed in this weekend meant movie-time, and one jewel we watched was The Company You Keep, directed by and starring Robert Redford, about some proverbial legal chickens coming home to roost decades later for some 1970’s-era radicals. By surrender... [read more]
Red Meat Celebrated
Following closely on the heels of a media fest over a study positing a causative role for red meat in the development of heart disease, a seemingly diametrically opposite result has come of a different study, this one from the Mayo Clinic... [read more]
Buy Pastured Meat for Public Health
When public health officials suggest actions we can take to improve our own health and the health of their community, it is time that they start advocating for the purchase and consumption of meat that has not been treated with antibiotics. Cows... [read more]