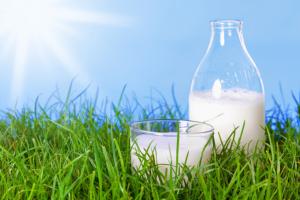 I just read a very nice article on organic vs conventional milk reporting on a recent rather large study. The study’s report introduces the topic with attention to just one of the problems of the standard American diet (SAD), namely that the ratio of omega-6 to omega-3 fatty acids has risen from an optimal ratio of 2.3 to levels of 10-15 (and even higher has been reported by some sources.) The researchers looked at milk from across the United States, and found that organic milk contained 25% less omega 6 fatty acids and a whopping 62% more omega-3 fatty acids. Conventional milk falls short of the idea ratio at 5.77 (still less than many conventional foods), but organic milk slips inside the “ideal” window, with a ratio of 2.28.

Looking at all fatty acids, or one by one, organic milk was superior across the board. Additionally they reported 18% more conjugated linoleic acid (CLA) in organic milk. CLA refers to a family of compounds, all relatives of linoleic acid, found mostly in the meat and milk of ruminants and credited with beneficial effects including less cancer and weight management.

The researchers’ conclusions involved other options for consuming more omega-3’s (eating more seafood), but the part of the article getting the most attention, rightfully so, is the difference between conventional and organic milk. The most likely difference is that the organic cows are fed more grass relative to grain, which improves both cow health and milk quality. The same difference applies when we compare ruminants (grass eaters, high omega 3’s) to natural grain eaters (chicken, higher omega 6’s) or contrived grain eaters, such as conventional beef which is either raised or finished with grains, resulting in lower CLA, lower omega 3’s and higher omega 6’s in meat, just like in the milk.

So, it's worth a bit of extra money: look for organic and grass-fed, whether you're buying dairy or meat.

Buy Pastured Meat for Public Health
When public health officials suggest actions we can take to improve our own health and the health of their community, it is time that they start advocating for the purchase and consumption of meat that has not been treated with antibiotics. Cows... [read more]
Health Benefits of Raw Milk
From 2004 to 2012, federal and state agents have conducted armed sting operations across America, raiding farms and issuing criminal warrants for farmers and shopkeepers from California to Pennsylvania. A few were even arrested. Were they after... [read more]