Once again, it's all related 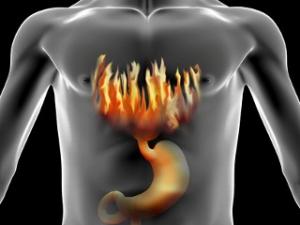 My jaw dropped as I queried, "What did your doctor say?" One of our most beloved local gastroenterologists actually said to more than one of my patients something along the lines of "You can stay on these proton pump inhibitors for the rest of your life if need be. They're perfectly safe." You have heard of proton pump inhibitors (PPI's) even if you don't recognize their group name: you've seen them at the drug store or on TV as their brand names of Aciphex, Nexium, Prevacid, Prilosec and Protonix. PPI's block stomach acid more effectively and longer (24 to 72 hours) than the older H2 blocking drugs (Zantac, Pepcid, Tagamet, and Axid).

Now my first thought was always to refer back to physiology, which in my mind condemns both kinds of drugs. Proton pump inhibitors (PPI's) interfere with the stomach's production of hydrochloric acid, which is used to break down food in the stomach as well as to lower the pH in the stomach, allowing the food to proceed from stomach to small intestine. This has always seemed like a doubly good idea to me: digesting the food sounds great, and then getting it to leave by the proper door, rather than refluxing back up the esophagus, kind of seems like a good original plan.

Finding an alternate approach to a PPI would be an even better idea when you take into account some of the other known adverse effects of using them: nutritional deficiencies (you need stomach acid to absorb vitamin B12 and magnesium), rebound in acid secretion (oops, worse reflux), gastric tumors, bone fractures (poor calcium absorption), and pneumonia. There is also good reason to presume a link between lowered stomach acid secretion and the development of functional digestive disorders, particularly small intestinal bacterial overgrowth. Our acid production declines normally with age and we rely on that acid to keep the numbers of viable bacteria (probiotics) down in the small intestine without damaging the population living in the colon. Great plan: acid from the stomach can kill the bugs in the small intestine, but as bile comes in from the gall bladder ("Wait he said you don't need that either?"), the acid is neutralized and is harmless to the bugs in the colon.

A new study published in June, 2015, highlights a new but not surprising risk: about a 16% increased incidence of heart attacks in folks using PPI's long term, apparently by an effect on the function of blood vessels in general. So not only is it true that your stomach acid is serving you well, but -- no surprise, really -- interfering with one physiological function evidently has farther reaching effects than anticipated. Interesting: so that guy clutching a closed fist over his chest might be suffering from either heartburn or, if he's treated the heartburn with a PPI, a heart attack.

Go with physiology. If you suffer from occasional heartburn, drink water which happens to dilute the acid wonderfully well. If you have it regularly, you need a closer look at your digestive function.