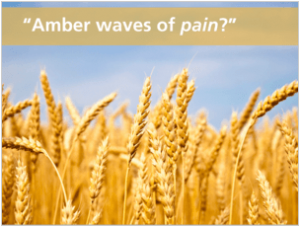 I should always clarify what KIND of news I'm including in this space. There is actual news: a new study, or a new observation, something that adds to the general body of information on which we all rely to keep fine-tuning our health to the best of our abilities. The second kind of "news" is when I write that the media version of some health-related news needs some serious taking apart.

Today I just really want to direct attention to a great article by Chris Kresser, LAc, in which he does the second kind of news reporting. He addresses the recent appearance in various media spots of stories supposedly debunking the gluten sensitivity stories. We have seen this kind of reporting before. Lots of excitement about the Paleo Diet? I know, someone will pay me to write an article about what's wrong with the Paleo Diet. Increase in organic food sales? Hey, here's one study I dug out of the cobwebs that shows there is no advantage to organics.

One of the darling topics to debunk these days is gluten sensitivity. (Have I told you the joke? A friend recently moved to Ashland, where I practice, and says the only thing less popular than the tax collector in our town is GLUTEN.) Based on books like Wheat Belly and Grain Brain, not to mention articles on this site, such as this one or this one or this one, many people have decided to experiment with going gluten-free. If they feel an improvement in their health, I'd bet good money they have no trouble staying off gluten all or most of the time. So, yes, there are many people (relative to the officially identified cases of celiac!) who avoid gluten without (shocker!) their doctor telling them to do so.

Kresser's excellent article details the science behind non-celiac gluten sensitivity. One of the main points about gluten sensitivity is that it's not all in the gut. Scientific research has well documented the different manifestations of gluten-related adverse effects, from the skin to the central nervous system. A modest familiarity with the research should make it impossible for anyone to say, "Your digestion is fine, we don't need to test for gluten." Not only are there many manifestations of gluten sensitivity, but it's good to remember that gluten is NOT an essential nutrient: anyone can give up gluten for a month with no ill effects, and perhaps some benefit.

Have a read, I think you'll enjoy it!

Related Articles:
Gluten Free Eating Plan
DEBORAH'S BLOG
Measure it to Own It