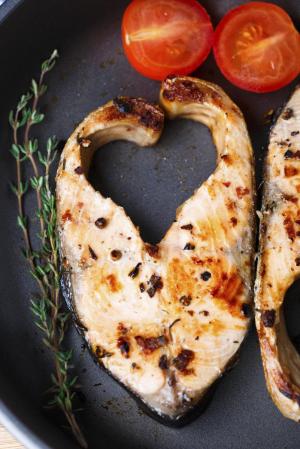 It’s not enough to say “Eat fish”. Based on yet one more study, I would advise you to eat fish TWICE a week.

A group of researchers designed a fairly simple observational study examining the dietary habits and cardiovascular health of 961 non-diabetic men found in an Italian shopping mall. Researchers noted to what degree certain conditions were associated with atherosclerosis in the carotid (neck) arteries, presumably a marker for stroke risk as the carotid arteries direct blood flow directly to the brain.

Factors associated with an increased risk included age, hypertension on medication and pulse pressure – which indicates that just the upper BP number is high, while the lower one is normal, also called “systolic hypertension.”

Happily, eating fish two or more times weekly seems to be protective, even in those men with harmful risk factors. Overall and in the higher risk group as well, fish eaten twice weekly reduced their degree of atherosclerosis by almost 50% compared to eating fish just once a week.

What counts as fish? The best fish might be those cold-water fish celebrated as heart healthy (salmon, halibut, sardines, mackerel, and herring), but the study did not distinguish the type of fish. I would also include shellfish in the category of “fish”.

What is your favorite kind of fish?

Related Articles:
Life Choices for a Healthy Heart
Hypertension
DEBORAH'S BLOG
How do YOU make changes?
I recently had a conversation with a fellow member of our local Rowing Club, I'll call her Wanda. Wanda has recently transformed her exercise habits, quite dramatically [read more]
Health & Wellness News
How's your health span?
You’ve probably heard alarm that our US life expectancy has gone down during the pandemic (and actually a bit before that as well), but I would suggest that one reason [read more]