Eggs and Bacon for Adults, Too 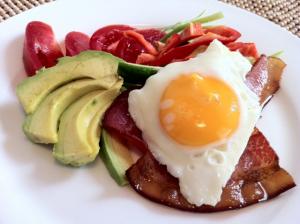 For decades, one possibility of treating seizures in children has been the ketogenic diet. Once the mainstay of epilepsy treatment, the troublesome ketogenic diet faded to a lesser position with the advent of pharmaceutical drugs capable of controlling seizures with only minimal or moderate side effects.

Applying the same treatment to adults has never been a part of conventional treatment, and expectations for its success have only revealed what someone thinks about nutritional treatment in general, as the issue just has not been studied. Ketogenic diets have not been considered acceptable for adults…until recently.

How timely, then, that a group of researchers in the UK report on an observational study with 23 adults, who seem to have taken the initiative – before it was ever officially proven – to try a ketogenic diet on their own. What they found was that about the same proportion of adults as children (39%) responded to the diet with a decrease in seizure frequency, often accompanied by a reduction in seizure severity and an increase in general cognitive function. Even without reducing seizures, the reduced severity and improved cognition was sufficient to motivate eaters to continue with ketosis, at times despite gastrointestinal symptoms. The ones who discontinued the diet were primarily those for whom it provided no benefit.

Is it safe? Is it doable? How perfectly timely: Jimmy Moore, with Dr. Eric Westman, recently released Keto Clarity, a book with the perfect amount of science (here’s why it’s safe and how it’s likely to help you) with practical information (here’s what to eat and how to cook it) to enable anyone to start their own trial of “Ketogenic Diet and Me.”

Related Articles:
The Only Problem with Eggs is the Toast
A Ketogenic Diet, the Short Version
Ketogenic Diet Better for Type 2 Diabetes
DEBORAH'S BLOG
Mixed Emotions

The Only Problem with Eggs is the Toast
You surely don’t need to be a research scientist to see the flaws in the utterly ridiculous study whose findings that recently made the news.  Researchers in Canada surveyed over 1200 middle aged men and women in a vascular prevention clinic where... [read more]
A Ketogenic Diet, the Short Version
A ketogenic diet is one that encourages your body to rely less on sugar-based fuels and rather to turn to fat and ketones (produced in the liver by metabolizing fat) for fuel.
Ketogenic Diet Better for Type 2 Diabetes
A recent study adds to the growing body of research evaluating low carbohydrate and very low carbohydrate diets. Working with a group of overweight and obese adults, all of whom qualified as either pre-diabetic or type 2 diabetics, researchers... [read more]