The Buzz About Meat 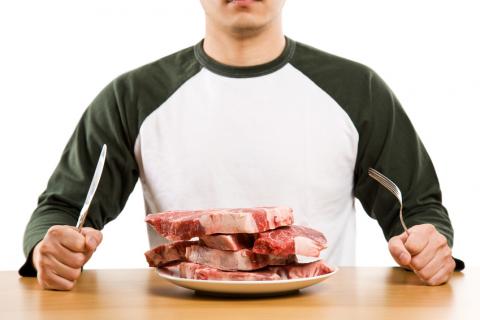 Everyone seems to be talking about the Harvard School of Public Health Study which claims that eating red meat causes death and disease. You may have already seen my blog post in which I commented on the aspect of the controversy closest to my heart, namely that they failed to distinguish between real meat from grass-fed cows and damaged meat from feedlot confined cows.

However, it's worth stepping into the fray just a little bit more, because if you don't eat grass-fed meat (admittedly it's hard to find and can be hard to fund), I want to reassure you that you can continue to enjoy your steak, lamb and pork.

The Harvard Study makes two types of common statistical errors. The first and worst error is to jump from an observed relationship to a presumption of cause. The Harvard group started with nutritional “recall” questionnaires (as reliable as asking you what you ate for dinner a month ago) and then followed the subjects’ health over decades and associated the two histories. The observation of a relationship is not valid or sufficient evidence to presume a cause: the possibility of confounding variables is too high. An actual experiment is required to make a conclusion. No responsible scientist or statistician would ever allow such a wild leap of inference. In addition to an elegant elaboration of this point, Gary Taubes points out that even the observed association is so small that it is barely worthy of notice much less excitement.

The second statistical error or oversight is the failure of the headlines to investigate any of the other associations noted. Weight went up and physical activity went down associated with greater meat consumption: which is the cause and which the effect? (Correct answer: it's impossible to know, it's just an association!) I enjoy the cholesterol statistics, because the highest cholesterol levels were found in the group that ate the… least meat. Maybe the high meat eaters just didn't have enough cholesterol to live very long?

The blogs I read of course have all taken various approaches to debunking or ridiculing the press coverage of the Harvard Study. Meanwhile, I'm sure there are vegetarian or vegan websites promoting the findings. But we can probably all agree, that we and the cows and the planet would be better off without feedlot beef, and that science should follow science's own rules, and not confuse an association with a finding.

Deborah Gordon, M.D., is a family physician specializing in Integrative Medicine. She is a co-founder of www.drdeborahmd.com

Ideal Diet
I'll start right off with admitting that it's a little naive to imagine that there is a single "Ideal Diet" that works for everyone. From decades of clinical practice, individual variability is the principle of reality that is most often confirmed... [read more]
The Candida Diet
While Candida albicans—a type of yeast species—is normally found in our digestive tract and on our skin, it can easily grow out of control when fueled by a combination of dietary and lifestyle factors. Millions of people suffer from the effects of... [read more]
Live and Learn and Lose It!
The second session of my class on losing it (weight, inches or inflammation - or all three!) is underway, and for those who didn't make it into the class, I want to talk about the main focus of the class: reducing carbohydrate intake. “Low carb” is... [read more]
Reduce Your Child's Risk of Allergies
If you have followed recent statistics on childhood health, you know that children are showing an alarming increase in allergies and eczema. The allergies range from life-threatening food allergies to simple respiratory allergies, sometimes... [read more]