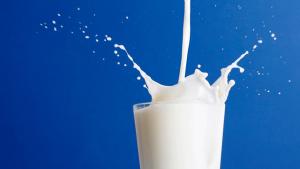 Does milk build strong bodies or is that just an advertisement?

We all know baby mammals drink milk and grow well with an exclusive dairy diet at the beginning of their lives, but what about those of us at the other end of our lives? Should we still be enjoying milk and imagining that it does us any good?

When it comes to bones, real milk (raw, organic, full-fat, from pasture-raised cows) should be good for bone building: a bit of vitamin D3, some vitamin K2 in the butterfat, and of course calcium in the milk. Not surprisingly, raw milk hasn't been studied in that way, but conventional milk has been studied and the news is not good for milk. In a recent article in the British Medical Journal, observing over 100,000 adult men and women over 20 years, there was no reduced fracture risk in milk drinkers.

More worrisome than a lack of benefit was the evidence of harm. Milk drinkers had higher mortality rates, up to almost double for those women who enjoyed three glasses or more of milk daily, compared to less than one glass. Men didn't fare quite so badly, but in both genders in a smaller study, milk drinkers were noted to have greater evidence of general inflammation and oxidative stress through markers measured in urine samples.

My advice is to stick to the cultured milk products, for the probiotics, and butter for the higher amounts of vitamin K2.

Healthy Help for Brittle Bones
Not exactly real news, but news to me, is a promising use of the supplement Resveratrol for bone health. I stumbled upon this article while researching a related topic, but it instantly caught my attention.
Vitamin K2 Reduces Bone Loss
One of the perplexing issues surrounding the prevention and treatment of osteoporosis has been all the hazards (increased ortality, increased cardiovascular disease) associated with the conventional medical recommendation to increase calcium intake... [read more]
Weak Bones and Diabetes, Why?
It has been previously noted that diabetes raises the risk for osteopenia and osteoporosis, although the mechanism has not been well understood. Rather than focusing on blood sugar levels, the researchers in a newly published study compared bone... [read more]